Readers of this website will be aware of the issues some users have in using a Virtual Private Network (VPN) inside of China. Much like other restrictive countries, China makes it as difficult as possible to use a VPN inside their borders.

While the Chinese government hasn’t “officially” made VPNs illegal in their country, they have been known to widely block VPNs and their websites, and to delete VPN apps from both citizens’ and visitors’ devices.

That said, while many VPN providers have given up on providing reliable VPN operation in China, others have continued fighting the good fight. NordVPN is one of those providers.

In this article, I’ll explain China’s VPN restrictions in greater detail, explain how to use NordVPN from inside China and offer tips on using a VPN with the popular iPhone smartphone.

How Does China Block Access to Outside Websites and Services?

The government accomplishes its blocking of the internet by using a combination of legislation and technology that has become popularly known as “The Great Firewall of China.”

In addition to blocking the outside world’s influence on the Chinese people, the Great Firewall also promotes the expansion of the Chinese domestic economy by limiting the effectiveness of outside companies in exposing their products to Chinese users.

How Does a VPN Help Evade the Chinese Blockade?

A Virtual Private Network (VPN) encrypts your internet connection, encasing it in a tunnel of protection that prevents any governments, Internet Service Providers (ISPs) or even the guy at the next table over down at Starbucks from monitoring and blocking your online activities.

A VPN can also make it appear as if you’re connecting to the internet from another geographical location, opening access to content that might normally be blocked from inside Chinese borders.

Unfortunately, many VPN providers have given up on offering VPN service in the Chinese market. However, there are VPNs that are still providing reliable VPN service in China. NordVPN is one of those providers.

Why Use NordVPN While Inside China?

NordVPN is my VPN of choice for using from inside China thanks to its optimal online security and privacy protections, as well as its access to reliable servers around the globe.

The provider offers excellent multi-platform app support, and you can also use it to protect all of your connected devices thanks to its extensive router compatibility.

There are also obfuscated servers, which hide your VPN activity, and a Double VPN option, which routes your connection through two VPN servers instead of one for added security.

Privacy is also a high priority at NordVPN, as they never log your online activities when you’re connected to their servers, and they also keep your payment information totally private by offering a Bitcoin subscription payment option.

How Does NordVPN Continue to Work Inside China?

NordVPN continues to work from inside of China for a few important reasons.

First of all, the provider does not have any servers stationed inside Chinese borders. This means the VPN provider isn’t required to comply with any of China’s overly-restrictive data retention and other privacy-invading laws and regulations.

Another reason NordVPN is so reliable is because the provider offers “obfuscated servers.” NordVPN specially configured these obfuscated servers for use in countries where internet access is heavily restricted.

While NordVPN doesn’t go into detail as to how their obfuscated servers operate (after all, why help China get a leg up on blocking them?), the process likely involves making the VPN traffic appear to be normal HTTPS activity. China can’t block HTTPS activity, as that is what nearly every website and service on the web uses to communicate.

First of all, be advised that while NordVPN works well inside China, the NordVPN website itself is inaccessible from inside Chinese borders. That means you should subscribe to the provider and install their apps on your devices before entering Chinese airspace.

Windows, macOS, Linux and Android users can reliably connect to an outside VPN server by using an obfuscated server. To use one of these servers, look in the “Specialty Servers” list for “obfuscated servers.” Click on that and then select the country to which you wish to connect. 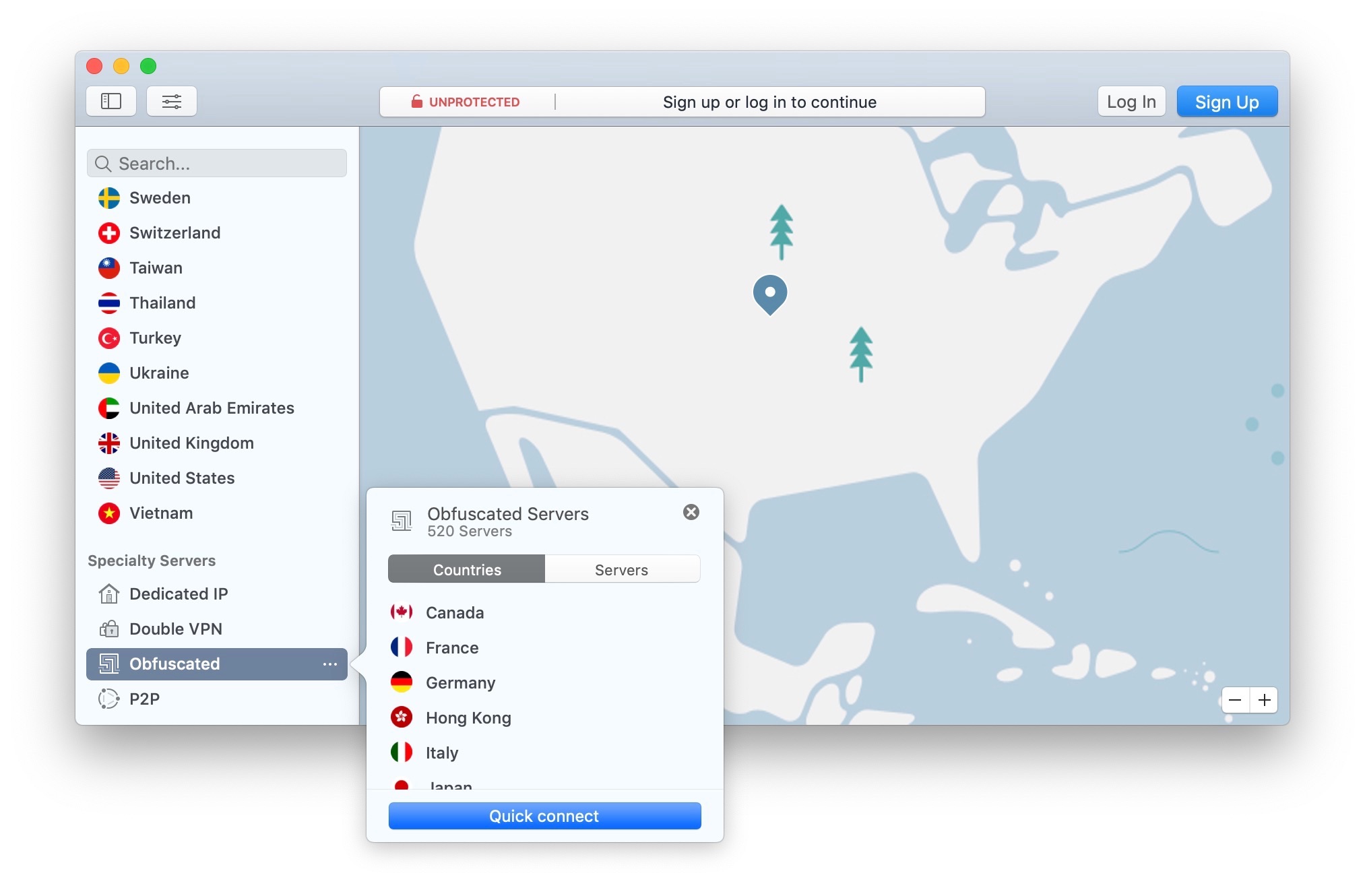 Note that in the Windows app, you’ll need to enter the NordVPN app’s settings and click on “Advanced,” then toggle the “Obfuscated Server” switch to “On.” “Obfuscated Servers” will then be available on the “Specialty Servers” list.

On macOS and Android, the obfuscated servers list should already be available after the app has been installed; just scroll down the server list to find the “Specialty Servers” section.

The iOS app doesn’t offer obfuscated servers as an option. However, entering “Settings” and setting the VPN protocol to “IKEv2” should still allow you to connect to a server outside of China. Don’t worry, IKEv2 still provides excellent protection.

Why Does China Block Certain Websites and Services?

However, it is clear to many users that the main reason for the government’s increasing internet restrictions is to prevent citizens from being exposed to information that might cast the country’s ruling Communist party in an unfavorable light.

The Computer Information Network and Internet Security, Protection, and Management Regulations ordinance of 1997 makes it a crime to use the internet to tell falsehoods, distort the truth, spread rumors or “[injure] the reputation of state organs.”

Users are also in violation of the law if they are “harming national unification” or “inciting to overthrow the government or the socialist system.”

What Websites and Services Does China Block?

While an exact count or list of all of the websites and services that China blocks isn’t available, as of October 2018, it was estimated that as many as 10,000 domain names are blocked in China.

Blocked sites include, but are not limited to:

However, a VPN can help you access Gmail in China and watch American Netflix in China.

What Other VPNs Work in China?

China does its best to restrict access to VPN websites from inside the borders of China, even going so far as to block websites that merely offer information about VPNs.

That means there are only a few VPN providers that have the resources to continue to fight the good fight by offering VPN service from inside China.

Currently, NordVPN, ExpressVPN, Ivacy, StrongVPN and VyprVPN are among the limited number of VPN providers to offer service in China. Of them, NordVPN is the best VPN to use in China.

While these providers do work from inside China, keep in mind that their websites are usually blocked, meaning you’ll want to make sure you subscribe to and install a VPN provider onto your device before entering China.

Is the Use of a VPN Legal in China?

Technically, the use of VPNs inside Chinese borders is restricted to government-approved VPN providers. As you can imagine, “government-approved” VPNs allow the government to monitor the online activities of its citizens, as well as any corporations (domestic or foreign) that are operating inside the country.

While the Chinese government officially banned all unauthorized VPN use in March 2018, this appears to be a formality, as Chinese VPN users saw no change.

While the Chinese government’s outlook on VPN usage means it’s tough to find a non-government-approved VPN for use inside the country, those who have subscribed to and installed a VPN service on their connected devices will likely still be able to use it.

That is, as long as the provider has taken steps to hide your VPN activity from the “Great Firewall.”

VPN providers that are successful in evading detection offer special features (such as NordVPN’s obfuscated servers) to fly under the Great Firewall’s radar.

While you can be hit with a fine if authorities detect your unauthorized VPN usage, visitors from other countries are not likely to be fined.

How Can I Check If a Website Is Blocked in China?

If you’re traveling to China soon and wish to check if your favorite websites, or the website of the VPN you plan on using when you’re in China, is blocked, you can easily test access thanks to numerous test pages around the net. One such website is found here. (Good news: Pixel Privacy is available inside China.)

If you’re headed to China, your VPN options may be limited, but they are by no means sub-par. Among the VPNs that continue to work well from inside China is NordVPN.

NordVPN provides reliable access to the world outside of Chinese borders thanks to its wide world server network and its ability to obfuscate its well-encrypted connections. This ensures your online activities while inside China will remain undercover and unblocked.